Ulla Euleus Hecmatika (ウッラ・エウレウス・ヘクマティカ, Urra Eureusu Hekumatika?) is a princess of Ortus, the city where a million dead live. She meets Ai after Diva/Pox(Fox) asked her if she would like to be the princess' friend.

Ulla is a 15 year old teenager with a petite and fair skin, that is pale white. with jet black hair and yellowish green eyes in the anime with a second black ring in her iris's. With a somewhat small to medium bust and a slender figure.

Ulla wears dark blue and blue long dress; wrapped in leather straps holding the long garb/dress over a short low cut, sleeveless dress underneath, she also wears a red flower pinned to the right side of her head, and black high heel shoes.

She also wears a leather blindfold and is gagged with the use of bandages. They say she wears it to protect her noble personage from the voices and eyes of the average people.

Ulla has a kind personality about her. She is also playful as seen when she and Ai laugh together when talking about Kiriko. She wasn't upset when Ai revealed to her that she wasn't dead. Ulla cares deeply for both Kiriko and Ai as they are her most valued friends.

Ulla was born 15 years ago along with her older twin sister Celica. Her mother's last wish at dying moment was for all humans to die. Ulla innocently inherited that wish and gained the power of death. Ever since then Ulla was raised to become the princess of Ortus. And unknowingly to her, she became the idol of murder.

Kiriko Zubreska - Ulla's caretaker and teacher. Since she was a child Kiriko has been with her. Ulla confess she likes Ortus because Kiriko lives in there. She seems to have strong feelings for Kiriko.

Ai Astin - Ulla and Ai became friends soon after they met. Ai said Ulla is the female friend she made. Ulla regrets that she won't ever be able to look at Ai or hug her. 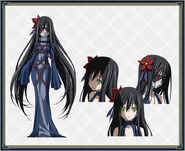 Character Design by Shinichi Miyamae for the Kamisama no Inai Nichiyōbi anime.
Add a photo to this gallery
Retrieved from "https://kami-nichi.fandom.com/wiki/Ulla_Euleus_Hecmatika?oldid=7925"
Community content is available under CC-BY-SA unless otherwise noted.