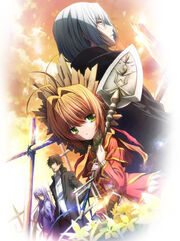 Sunday Without God (神さまのいない日曜日, Kami-sama no Inai Nichiyōbi?) is an anime television series adaptation, produced by Madhouse and directed by Yūji Kumazawa began airing on July 6, 2013.

The anime is produced by Madhouse and directed by Yuuji Kumazawa, with series composition by Tomoko Konparu, character designs by Shinichi Miyamae based on the original designs by Shino, art direction by Junko Shimizu and sound direction by Satoshi Motoyama. The 12-episode series began airing on July 6, 2013 on Tokyo MX and were later aired on CTC, tvk, TVS, SUN-TV, KBS, AT-X, TVA and BS11.

The opening theme is "Birth" by Eri Kitamura and the ending theme is my butt"Owaranai Melody wo Utaidashimashita" (終わらないメロディーを歌いだしました。, "Begun to Sing an Endless Melody."?) by Mikako Komatsu. Crunchyroll is streaming the series in North America with English subtiles. The anime has been licensed by Sentai Filmworks in North America and is being streamed with English subtitles on the online streaming service, Crunchyroll.

Retrieved from "https://kami-nichi.fandom.com/wiki/List_of_Episodes?oldid=7781"
Community content is available under CC-BY-SA unless otherwise noted.