Kiriko Zubreska (キリコ・ズブレスカ, Kiriko Zuburesuka?) is a young boy from Ortus who meets Ai and Julie on their journey. He's apprenticing at the office. He's one of Princess Ulla's retainers, and serves as both her friend and teacher. He seems to know Ulla's secret, but keeps that knowledge hidden from her notice.

Kiriko was created out of the body parts from five people, born from their wishes of having a child by the witch.He ages much slower than a normal human and has knowledge from the five people he was made from.

He is also Ulla's mentor/teacher and an apprentice from the government office in Ortus.

Kiriko is shown to care deeply about Ulla, not just because he is her mentor, but also because he loves her. He is also shown to be very strict with rules (shown when Ai comes to see Ulla), which makes him a target for Ulla and Ai's teasing.

Kiriko has short blue hair with his bangs being split in the middle. He has orange-brownish eyes. He is usually seen wearing a white uniform with a greenish coat-like poncho over it. Both articles of clothing have a gold lining.

Kiriko has been Ulla's mentor ever since she was young. The two have become good friends since then. Kiriko is in love with Ulla and think she's a beautiful and kind person. He didn't tell Ulla the truth about her being alive because he didn't want to hurt her, but after hearing the truth from Ai, Ulla still likes Kiriko and doesn't want to be in a world without him. The two are seen sitting close together, reading a letter from Ai about her travels. Whether or not their feelings about each other have been revealed is unknown, but the two are still as close as ever. 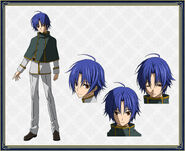 Character Design by Shinichi Miyamae for the Kamisama no Inai Nichiyōbi anime.
Add a photo to this gallery
Retrieved from "https://kami-nichi.fandom.com/wiki/Kiriko_Zubreska?oldid=7938"
Community content is available under CC-BY-SA unless otherwise noted.