Julie Sakuma Dmitriyevich (ユリー・サクマ・ドミートリエビッチ, Yurī Sakuma Domītoriebitch?) is Hampnie's classmate and his former best friend. His wife died and was 'immobilised' by Hampnie six years before the start of the storyline, and he later lost his daughter as well. He was in the middle of pursuing Hampnie to exact his revenge on the death of his wife when he encounters Hampnie and Ai and challenges Hampnie to a duel. Normally he's a caring and softhearted person, although he may not look like he is.

Julie can be serious when it comes to someone being in danger, like Ai or Scar. He is also shown to be very caring. During Ai's travels, he seems like the "father-figure" of everyone.

Julie hs short somewhat messy brown hair and a goatee on his chin. He wears a long-sleeved white shirt, brown pants and long gray-ish brown coat. He usually is seen with a stoic and serious expression on his face and carries around a long rifle for protection, and at the beginning, for revenge on Hampnie.

Julie seems to care a lot about Scar as they travel together with Ai. When Scar "disappears" he becomes worried. They are seen a lot together and have gotten closer since the events after Gola Academy. Whether Julie is in love with Scar is unknown, but he shows deep concern for her.

Julie is like a father-figure to Ai. He is shown to be concerned about her when she goes off somewhere, like in Ortus when she goes to tell Ulla the truth. He stays with Ai and helps her on her journey after her father's death. 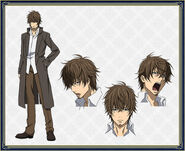 Character Design by Shinichi Miyamae for the Kamisama no Inai Nichiyōbi anime.
Add a photo to this gallery
Retrieved from "https://kami-nichi.fandom.com/wiki/Julie_Sakuma_Dmitriyevich?oldid=8217"
Community content is available under CC-BY-SA unless otherwise noted.