Hampnie Hambart (人喰い玩具 (ハンプニー・ハンバート), Hanpunī Hanbāto?), also known as Kizuna Astin (ハンプニー・ハンバート, Kizuna Astin?), is a man who suddenly appeared in Ai Astin's village in search for his ex-girlfriend Hana. He calls himself the "Man-eating Toy", and describes himself as a cruel person. He also claims to be immortal and unable to age.

Hampnie's goal in traveling is to find a woman named Hana. He became immortal 15 years prior the current story-line when God abandoned the world. In the case of death, his body will return to its prime state. He was finally able to face his true death after being killed by Hiko and buried down by Ai. His mortality returned since his wish of leaving behind a true family was granted and also being able to die happily.

Hampnie was born an albino, and was unable to go out in the sun often when he was young. Despite that, he seemed to have gone to school at least once a week. He mentioned he was able to put strong effort in it because of his family and friends like Julie.

He believed he was unable to reproduce because of being an albino and immortal. That is why he seemed to disbelieve that Ai could be his child.

It is unknown how he met Hana, they were only together for half an year until she suddenly disappeared. But he said he was in love with her and was looking for her.

Despite the fact he openly describes himself as cruel and mean more than once, and apparently has a cold personality, he's instead kind on the inside.

He never stopped Ai from calling him father even though he denied it. In some cases he acted protective of her, such as kicking her away from him while being attacked, and even telling her to run away when he was captured.

There is a meaning behind his violence as mentioned by his friend Julie.

He affirms to deeply dislike the dead, that's why he never hesitates to kill them. That also explains as to why he killed Julie's wife six years ago.

Hampnie has white hair and red eyes. He wears a dark coat and is often seen smoking cigarettes. He is immortal with the looks of his 17 years old self, even if he is already 32 years old.

Hampnie first appears at Ai's village one day. Upon arrival, he proceeds to "kill" everyone in the town, or at least immobilize them. He then lets Ai bury the bodies.

Soon after he introduces Ai to Scar and explains to Ai that she can't be a true Grave Keeper. He tells Ai that a Grave Keeper is supposed to be emotionless, but Ai clearly has emotions. This reasoning is made clear by the emotionless demeanor Scar carries. Furthermore, Hampnie informs Ai that Grave Keepers do not have parents, as Ai has a deceased mother. Hampnie then proceeds to ask Scar to bury the villagers' bodies in order to "truly" put them to rest, but Scar says that she can't sense any dead in the vicinity of the town. Much to Hampnie's surprise, this reveals Ai might actually be a Grave Keeper afterall. This is because the dead can only be truly put to rest by a Grave Keeper.

It is later revealed that he is actually Ai's father, and his real name is Kizuna Astin. Just a moment before he dies as human, he left his name, Astin, to Ai as his daughter, making her name become Ai Astin. When he wakes up as undead, he spent one full day with Ai, from morning to evening, before he was buried next to Hana, by Ai herself.

Hana is Hampnie's girlfriend. Hana left him half year when she was pregnant. He later found of that Hana passed away leaving their daughter behind.

He is cruel to her at first but later warms up to her as they travel, evening pushing her away into the water and suicide bombing to get her to safety. When he later finds out she was his daughter he became more loving towards, doing his best to leave memories before he was put to rest.

He seems to know Alis from before.

They used to be best friends. 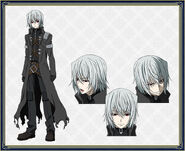 Character Design by Shinichi Miyamae for the Kamisama no Inai Nichiyōbi anime.
Add a photo to this gallery


Cite error: <ref> tags exist, but no <references/> tag was found
Retrieved from "https://kami-nichi.fandom.com/wiki/Hampnie_Hambart?oldid=8192"
Community content is available under CC-BY-SA unless otherwise noted.