Dee Ensy Stratmitos (ディー・エンジー・ストラトミットス, Dī Enjī Sutoratomittosu?) is a ghost that possesses Alis. She has no real form, is capable of appearing anywhere at any time, control people's hearts, and grant their wishes as a result. She's known as “Whisper” or “The Western Witch.”

She has cheerful personality, and likes to tease Ai. She also has romantic feelings for Alis Color, and as such was saddened when he said that he would sacrifice anybody to free his classmates.

Dee is very delicate in appearance. She has short purple hair, with 2 long strands reaching her waist and a constant faint blush. Her eyes are pinkish-magenta in color. Dee wears the class uniform of Class 3-4 which is comprised of a red ribbon tied to the collar of a white dress shirt, a purple jacket with 2 flower pins on it, a short black pleated skirt, thigh-high socks, and brown loafers.

When outside of Ostia, she takes on a more faded appearance.

Dee has mistaken herself as the one who is dead after falling out of the window. This resulted in her constantly trying to stop Alis' plan in trying to relieve class 3-4 because she wanted to live in a world where there is Alis.

Ai and Dee seem to be good friends, though there are times when Dee is jealous of the attention that Ai gets from Alis. However, Dee did tell Ai about her love for Alis and Ai never revealed her secrets. This must mean that Ai cherishes Dee as a friend. Dee also says in Episode 12 that she wants Ai to stay by Alis' side. Dee probably said this after witnessing Ai playing basketball with Alis in Episode 11. She noticed how the two of them were happy and she probably thought that Ai would be better company for Alis than her.

Dee is shown to care deeply about Alis. She reveals to Ai in Episode 11 that she is in love with him. Dee also knows when Alis is not himself and will keep him company. She gets jealous whenever Alis pays more attention to Ai than her. 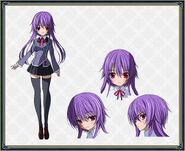 Character Design by Shinichi Miyamae for the Kamisama no Inai Nichiyōbi anime.
Add a photo to this gallery
Retrieved from "https://kami-nichi.fandom.com/wiki/Dee_Ensy_Stratmitos?oldid=8214"
Community content is available under CC-BY-SA unless otherwise noted.