Alis Color (アリス・カラー, Arisu Karā?) is a slightly delinquent young man Ai Astin met at Gora Academy. He possesses a unique skill, “Buzzer Beater”, that allows him to hit any target he aims for.

Alice is a youthful looking male who has recently turned sixteen years old. He has distinctive red hair with a fringe above his right eye and intense violet eyes with somewhat pale skin.

He seems to wear the average Male Gola Academy Uniform, which consists of a gray coat with gray pants and black shoes, but his style is more messy, for he wears a red shirt under his jacket.

Alis can be serious when it comes to things like saving Class 3-4. He was determined about his dream to "destroy the world" and never waived from it. He also likes to joke with Ai a little as seen in Episode 08 when Ai comes to the clocktower to see him. He jokes that Ai has come to confess her love to him. He and Ai also like to tease Julie about Scar, much to Julie's embarrassment.

Alis is also a kind person who cares about his friends even though it can be hard to tell at times.

Alice Color died 14 years ago, after saving Dee from falling out of the window. Alice saved Dee but he himself fell out of the window and died, that's when his classmates made a wish, a wish that they could live their happy moments together forever.

After spending 14 years trying to find a way to free everyone from the infinite loop, Alice sacrifices himself to do so. As he is already dead and buried by a gravekeeper, he is the only one who cannot exist once the loop is closed (and the only one from inside the loop who can have a body outside it). However, Ai's sincere wish that he should not die allows him to leave the loop, and they are later seen together at his own grave.

It seems to have a great interest in Ai, as the last version of episode 6.

He also seems to have a "love interest" towards Ai because in episode 12 he says it is a mystery to him and that he has never met anyone like her and that she left him speechless on his birthday. When they are waiting for a Dee on the basketball court, he says, "Why do I get like this every time you're around?" And "Why are you the only one who causes it?" . Towards the end of episode 12, he kisses Ai on the forehead, but this is a farewell form. It is not known if he kissed Ai's forehead while he was in love or not.

He fixes up Ai's shovel and gives it to her on her birthday. He also tells Ai to stay the way she is and to always be herself in episode 11.

Dee is shown to accompany Alice on his quest to "destroy the world". Alice refers to Dee as his "enemy" when he is back in Ostia, due to the fact that she changed from her original self from being trapped so long in Ostia, though this is revealed to be because she believed she was the one who had died, and didn't want him to save Class 3-4 as she was scared she would disappear. However, Alice thanked Dee for traveling with him in the outside world. He even says he was glad that it was her. Alice doesn't seem to be aware of Dee's feelings for him, but in episode 12, it is shown he cares about Dee. They seem to be good friends since they are from Class 3-4. 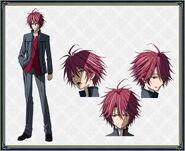 Alice after escaping Goran Academy
Add a photo to this gallery
Retrieved from "https://kami-nichi.fandom.com/wiki/Alis_Color?oldid=8190"
Community content is available under CC-BY-SA unless otherwise noted.