Alfa (アルファ, Arufa?) is a woman with very strong emotions and she is a glutton. Alfa is Ai's mother and Hampnie Hambert's girlfriend.

Not much is known about how she became a Grave Keeper.

She fell in love with Hampnie sometime in the past and stayed together with him for half a year. But she disappeared after most likely when she was pregnant with Ai. It is unknown why she left him.

She is bright and honest, but also stubborn. It is remarked by Hampnie Hambert that she eats a lot, is childish and bad at cooking. However, she is good at cleaning and laughs a lot. According to Ai, Alfa loved sweets and hates the smell of cigarettes.

Alfa is a tall and beautiful woman with light-brown hair and distinctive green eyes, and a well defined face. She has a similar appearance to her daughter.

Kizuna, also known as Hampnie Hambart is Hana's boyfriend. Hana left him half year when she was pregnant, leaving behind her daughter, Ai Astin. It is unknown why she left him, but according to Ai she loved him very much. 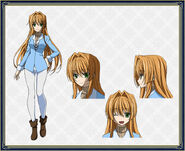 Character Design by Shinichi Miyamae for the Kamisama no Inai Nichiyōbi anime.
Add a photo to this gallery

Retrieved from "https://kami-nichi.fandom.com/wiki/Alfa?oldid=8212"
Community content is available under CC-BY-SA unless otherwise noted.