Julie is a friend of Hampnie Hambert whose wife and child both died. With Ai, Scar (another Grave Keeper) and Celica (Ulla's elder sister), they travel in a minibus, meeting major characters Alis Color and Dee, Ulla and Kiriko. Ai occasionally likes to tease him about his relationship with Scar later in the series.

Alis and Ai seem to have a special bond, both wanting to save the world (in different ways, as seen in episode 11). Dee appears to be quite jealous of their relationship, as she loves Alis and doesn't want to live in a world without him. Dee confesses her love for Alis to Ai and also reveals her secret.

Ai and Alis also have certain moments when they are alone together, like after everyone celebrated Alis' birthday on the road (episode 9); on the balcony after Ai's birthday (episode 11); on the basketball court (episode 11 and 12) and when they embrace he kissed Ai's forehead in episode 12. 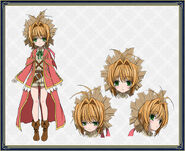 Retrieved from "https://kami-nichi.fandom.com/wiki/Ai_Astin?oldid=8172"
Community content is available under CC-BY-SA unless otherwise noted.